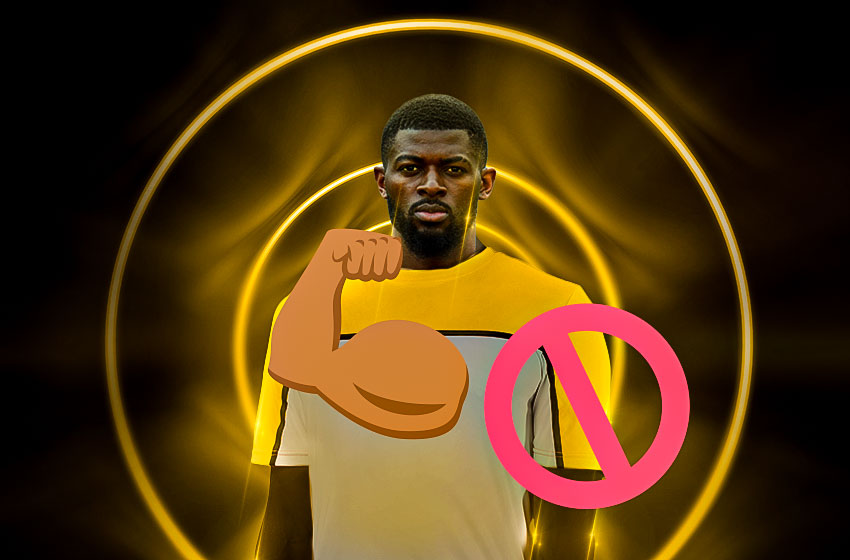 When mentioning RB Salzburg, you’re not only talking about a powerhouse in Austrian football, it is also a club with an eye for talent. Winning the UEFA Youth League in 2016/17, we have no doubt that the club does believe in developing young players into world-beaters. One of their highly-touted youths is the player we chose to focus on in this blog post. He is Cameroon-born centre-back, Jérôme Onguéné.

Contents hide
1. Become an Insider.
2. Who is Jérôme Onguéné?
3. More About Jérôme Onguéné
4. What is his style of play?
5. What are his strengths?
6. What are his weaknesses?
7. Stats Analysis
8. Potential – Our View + Transfer Forecast/Future Moves
9. Our View (Summary)
10. Here are Some of our Favourite Football (Soccer) Cleats

There is not much that we know about Jérôme Onguéné’s early football career in his native country. His first documented football experience came in France. FC Sochaux was the team with which he signed his first professional contract. He spent a total of six years at the same club, where he rose through their ranks and made his professional debut in Ligue 1.

The then 20-year-old moved to Germany, specifically, VfB Stuttgart. He only made 2 appearances before he was immediately loaned out to RB Salzburg.  There he would make his real first impact in the German league, enough to convince RB Leipzig to make his loan deal move, a permanent one. Since then the Cameroon international has been plying his trade with the German outfit, also making 4 appearances for his country along the way. At the time of writing Jérôme Onguéné has so far lifted three trophies with the club, the Austrian Bundesliga (17/18, 18/19), as well as the Austrian Cup (18/19). He was also part of the France U19 team that lifted the European U19 Championship in 2016.

Jérôme Onguéné is your typical no-nonsense centre-back. Being this type of defender means that his main objectives during the game is to simply win the ball back from the opponent and clearing it safely up the field, in a simple and efficient manner when required.

Already notorious for his reckless style of defending, he seems that he enjoys going into tackles, as much as a striker enjoys scoring. As previously stated, he is not the fanciest of defenders but he will simply get the job done, preventing the opposing players from entering the 18-yard box at any cost. His tall frame also makes him a nightmare for any striker to come up against, be on the ground or in the air, with the 1.9 metre Cameroonian excelling in both aspects, boasting an average of 2.3 successful air duels per game across this season.

The defender is usually, and wisely, paired with a ball-playing centre-back. This is done to balance out and stabilize the back line of whichever team he is playing on, and in the meantime also give another dimension to the defense.

As mentioned in previous paragraphs, Jérôme Onguéné has a knack for being relatively more physical when it comes to defending. Strength plays a big part of the reason why he does so. The youngster is a naturally fit player, which is probably why strength is a big part of his game, given his size. But having strength alone is not all that useful unless you have will to impose it at the right time. This is where his both his bravery and determination come into the spotlight.

The player is known for going into challenges more frequently due to his no-fear attitude, making him a key yet risky tackler, which proves fruitful more often than not. When all else fails, the defender can always rely on his quickness. Yes, that’s right, the tall Cameroonian has immense speed, which he mostly displays when he is trying to make-up ground on his opponent. This comes to no surprise to us, the reason being that the defender is an impressive overall athlete, fitness being his forte.

Jérôme Onguéné does not have any noticeable weaknesses when it comes to his defending game. However, he does lack in some departments when it comes to footballing skills. One example is his playmaking ablity, the defender lacks the vision to play long passes, instead opting to just pass the ball to the nearest team-mate, taking minimal risk but slowing down the play at the same time. This is the reason as to why he is usually deployed alongside another centre-back capable of pinging direct balls forward.

With reference to the previous, crossing is also weakness of his, which is probably why he was never used as a full-back. RB Salzburg’s number 6 also finds it hard to dribble his way out of tricky situations, as can be frequently observed in his games.

Jérôme Onguéné has already played 18 times this season, unsurprisingly, all of them coming at centre-back. At 22-years-of-age, he has already gained crucial experience, even playing at the highest of levels, that is the Champions League. In the appearances given this season, Jérôme Onguéné has provided RB Salzburg with solid performances at the back, against various opponents.

Playing in a relatively young team will also benefit the Cameroonian in playing time hence having more of a chance to develop and impress on an international scale.

With a total of 123 club appearances, Jérôme Onguéné is no rookie by any means. He is rather an experienced player who has shown immense discipline, and also proved that he belongs at the very top, with moments of brilliance at the back. With a lack of centre-back choices amongst the Cameroonian national team, the defender also has a great chance of racking up more appearances for his country, enabling him to gain even more experience.

As can be noted from his transfer history, the defender has always been touted as a promising player, with a move from a Ligue 2 club to a Bundesliga club at an early age. The player has shown that he can adapt to any situation and challenge that he faces with, impressing at every club he was at.

Being a highly-touted, roughly-polished centre-back, he is undoubtably going attract a lot of clubs, vying for his services. The choices will be endless however, he also needs to keep his feet on the ground and make sure that he is ready to take the next step.

A move which would enhance his chances of developing into a world-class player would be to top-half Bundesliga team. Notable teams are title-challengers Borussia Dortmund, FC Schalke 04 and Bayer 04 Leverkusen. All of the afore mentioned clubs could arguably give the Cameroonian ample playing time as well as crucial experience in a top-five league.

A defender of his style would surely suit any club, but more-so an English Premier League club. A fast-paced league with a world of opportunities within it. It seems that Onguéné is built for the English game, and what better teams to play in other than those currently at their peak. Yes, I am speaking about Liverpool and Manchester City, two clubs with and undoubtably bright future ahead. We are curious to see the young centre-back team-up alongside Virgil van Dijk or Aymeric Laporte. Big names whom are both excellent at being ball-playing defenders.

A random, yet sensible move would be to go back to where it originally started, to France. The player is well suited for Paris Saint-German. With at an ageing Thiago Silva, it might be the perfect time to seize the opportunity. He could then easily earn a starting place with the French giants. Trophies would surely be of no problem, just like playing time.

From our point of view, a pacey defender at the age of twenty-two, should seriously consider a transfer to a top English team. It could honestly be any team in the top-half. As long as he can play regularly in order to continue improving on his already impressive ability.

Finally, not depending on where the player does go, he will enjoy success because he can easily adapt to any style of play. Onguéné is showing that he is a class defender ready for a higher level of football. A unique talent such as his will surely be in high demand in the next few years or so. The Cameroonian certainly has the potential to become a defensive rock for his club. Certainly by putting in one exceptional performance after the other. How certain are we? Well, that all depend on how the youngster will tackle his challenges that he will face during his career.

Football Association (FA) coaching badges are necessary if you seek…