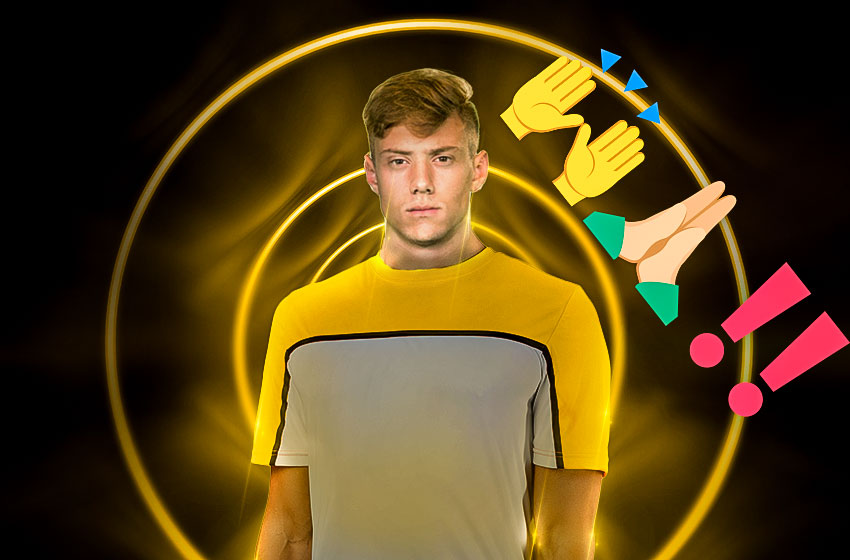 Italy, a country known for many fine things, be it it’s fine architecture, the culinary arts and so on. But one thing that a football enthusiast will almost surely mention when hearing about the country is… the ability to constantly produce world-class defenders. Franco Baresi, Paolo Maldini and Fabio Cannavaro are all graduates from the school of defending, that is the Serie A. We can safely say that it is no fluke when such talents arise from Italian Football. The latest one to do so is a certain Gabriele Corbo. Filling the boots of his compatriots is by no means an easy feat. However the youngster is surely showing early signs of promise.

Contents hide
1. Player Profile | Gabriele Corbo
2. Who is Gabriele Corbo?
3. What is his style of play?
4. What are his strengths?
5. What are his weaknesses?
6. Stats Analysis:
7. Potential – Our View + Transfer Forecast/Future Moves
8. Our View (Summary)
9. Here are Some of our Favourite Football (Soccer) Cleats

Who is Gabriele Corbo?

A young boy, brought up in the football-crazy city of Naples, Gabriele was surely not lacking exposure to football. The young Italian firstly joined Spezia Calcio at an early age, where he constantly had one stand-out performance after another. Scouts at Bologna where really keen on bringing the, then 18-year-old defender, to the club. The Serie A outfit did so before any other club had taken notice of the player’s talent and potential.

At the time of writing Gabriele Corbo has, so far, lifted the Italian Primavera 2 Supercoppa (18/19). The player was an integral part of the youth squad that triumphed in this competition. It is the main reason why he was recently promoted to the first team.

At 1.86 metres tall, there is no doubt that the Italian defender is a solid player at the back. As one would imagine Gabriele is not one who would shy away from a crunching tackle, in fact, in some cases he tends to be too brave as well.

Further analysis has also revealed that the player does not take any risks when it comes to passing. He is a defender that always prefers to play short and simple passes whenever possible. This enables his team to keep safe possession of the ball rather than hoofing long balls over the top. Contary to his passing, Corbo does have a mean strike, although not the most prolific. In fact, during his youth academy outings, Gabriele Corbo could often be seen taking charge of long-distance free-kicks.

Of the many traits a complete defender has to have, one of the most important is marking. The young Italian has an incredible sense of knowing where his opponent is, and where he could be. We could also say that he is rather an incredible reader of the game. As everyone does know the game is getting faster and more hectic than ever before, hence pace is a valuable asset to have as a player, an asset which Gabriele Corbo does possess. This enables him to catch up with his opponents when facing a counter-attack, it also helps him in making up serious ground when he is caught off-guard.

Could a defender be both fast AND strong? Not likely, it is either one or the other, however in this case the youngster has both, and to top it all off he also has incredible balance. Balance is a highly important trait when playing at centre-back.

Arguably Gabriele Corbo’s worst weakness is his lack of communication, which leads to weak teamwork, something of high importance when playing in a defence. Another area where he simply has to improve is his off-the-ball awareness, which results in him being caught out of position, forcing him to go into unnecessary challenges.

Crossing and vision are unquestionably two areas of his ball-playing abilities where he does not thrive as much, which is most probably the reason why he does not play in wide positions on the pitch.

Another, not-so-worrying, weakness is his dribbling. Again it is not something you’d expect of a defender, however it would be useful when trying to come out of tricky situations, when a defender is in a backs-against-the-wall situation. This trait might be something that improves as seasons go by, and experience is gathered, which is why we will not give it much importance.

Gabriele Corbo has been involved in a total of 18 appearances this season, one of which was his Serie A debut. The other 17 have come in the Italian Primavera, however, with Bologna regaining form under their new manager, we could see him get more first-team minutes on the pitch. Being in a relegation battle is not for the faint-hearted hence this could be a crucial season for the youngster to gain invaluable experience going forward.

With a total of 75 appearances, Corbo already has ample playing time under his belt. Though he is still considered to be an inexperienced player, albeit a player who has proven himself to be a great asset at the back, he is clearly mature enough to play at the highest level. The chances will surely come, be it this season or the next, one thing we know for sure, is that patience will be a key factor in his development.

For a player still at the very early stages of his career, he has already made big moves, showing that he ready to take on a challenge with determination to succeed. The hefty fee paid by Bologna also puts some of pressure on his shoulders, with them expecting great performances in the future. That is something we believe he will do easily due to his strong mentality. A young defender plying his trade in top-flight Italian football is surely something to be excited about!

If Gabriele Corbo does maintain his development at this rate, we could eventually see him being snapped up for big money. Does he have the will to do so?

A realistic move would be to mid-table Italian club. This is the most sensible move since the player is still at a sensitive age, that he could use this move as a stepping stone. If he could properly establish himself at that level, the sky would be the limit for the young Italian who then go on to bigger and better things.

How many of dream of playing for our hometown club? I assume Gabriele Corbo’s is nothing different than that. With Koulibaly constantly looking for a move, the Naples native could well secure a move to SSC Napoli. There he could become a club legend, and etch his name in Neapolitan folklore.

Another, not so favourable move, would be of that to the English Premier League. A league where big money is being paid for any sort of player who could play along the back line. The player would probably find himself out on loan for a period of time before he would actually make any first-team appearances. It could prove to be either a success story or a total disaster, no in-between, some might call it a case of do-or-die.

From our point of view, a player of his quality should look to move up to a well-established Italian team. That is considering whether or not Bologna fail to beat the drop this season. A team like Atalanta, who recently shipped off their best centre-back, Daniele Mancini, to AS Roma, would suite him very well.

Its going to take a formidable effort from Gabriele Corbo to garner any interest from other clubs, for the time being. However, we do believe that the young Italian will have quite an incredible career, bar any setbacks such as injuries.

Another ray of hope for the Italy U20 player, is that Italy’s ever present duo of Leonardo Bonucci and Giorgio Chiellini are reaching what is probably the end of their international careers, hence providing opportunity for the young Italian to seize the moment and also impress on the international stage. One could dream, couldn’t he? Well this definitely a dream waiting to happen for Bologna’s number 25.

There is no doubt that footballer contracts have evolved in…