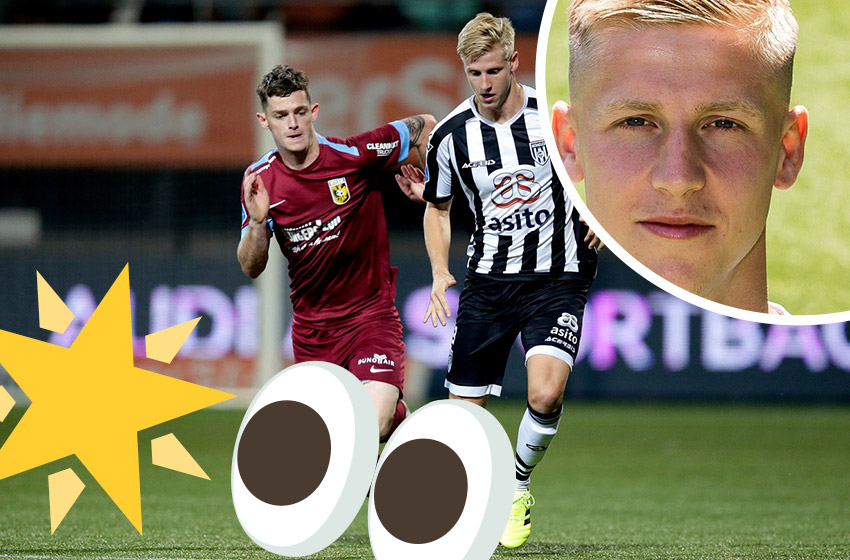 Heracles are currently not the best team in the Eredivisie but have won their league two times, in 1927 and 1941. During this period, they managed to produce some players who made history for them. They are not as noticeable like Ajax when it comes to producing young and talented prospects. However, this year, the Heracles team are very confident that their young Centre-defender will lead their team to glory once again. Such high hopes for Mats Knoester; an outstanding player at just 21 years of age.

Mats Knoester started his football career in Feyenoord youth academy where he played and developed there for over a decade, before transferring to Heracles on January, 2019. He made his first appearance for Heracles in February, 2019 where his side came out victorious over a fully fit Ajax.  He is not quite a goal scorer, but mostly concerned with securing the goals scored by his teammates. A solid and very mature Centre-back.

What is Mats Knoesters’ style of play?

Mats Knoester shows a very mature prospect having all the traits that a Centre-defender possesses. He is very composed and level-headed, an exceptionally important player for Heracles Almelo. With his advanced style of play, he knows by instinct how and when to tackle. He positions himself in the right place, and intercepting very efficiently. To add up with, Mats Knoester is a pillar in his field showing that he is there to stay. He shows decent strength when it comes to attacking, as he is very aware of what is happening around him at any given situation. Such a joy to see him play, we would not be surprised if there are big clubs watching him at this given moment.

What are Mats Knoesters’ strengths?

Mats Knoester is a very important player in the heart of the defense. He shows massive strength when it comes to defending, possessing some key attributes for a defender like man marking and tackling. To add up with, he is a very important team player. His leadership quality is amazing too. In an all-round performance, his heading accuracy and aerial dominance is great. He has the stamina and endure the whole 90 minutes of the game.

He has an average rating of 51%. This means that there are areas of the game where he must improve.

What are Mats Knoesters’ weaknesses?

Mats Knoester has not too many weaknesses apart from the fact that he lacks some attacking attributes. These attributes include vision, finishing, long passes, etc. They are the particular traits possessed naturally by an attacker and should not matter whether a defender like Knoester possesses them. The most important thing is that we are certain he will make a difference for his team in the years to come.

(currently 18 league matches have been played)

Mats Knoester has had a great season opener as he played all the 18 matches; whilst starting all of the possible matches. Knoester has proved that he is first team material, as a matter of fact, this is his first season which he is essential for the starting 11 line-up.  Eredivisie is a league has which produced and developed world class players; a great stat for any player.

Mats Knoester is a player which attracted a whole lot of team throughout his career; however, he never got the breakthrough he deserves – up until this season (19/20). Having played for Netherlands national teams through his youth days, he has shown that he is a professional which is able to handle any pressure. Having said that, he penned a contract with Heracles Almelo in the middle of last season, where they took their time to let him settle in. At 21-years-of-age Mats Knoester is now flying, producing massive performances consistently.

Mats Knoester did not have it easy. Having had his promotion to Feyenoord Senior team to be then demoted to the U21, we think that he was not happy with it. Thus, we believe, this is what triggered his move to Heracles Almelo. Having said that, we can see that Mats Knoester is no push over. He is hungry for more, thus why we really believe in him.

We definitely believe that Mats Knoester has all the right traits. We could see that his is hungry, we could see that he wants to succeed. Yes, he is still learning and improving, but he has a very good portfolio. He was selected for the youth national team for quite some time and having played in a whole bunch of matches. This season he is utterly impressive, having come from a very long way. We love how he fought back to pursue what is best for his career. We can see that Mats Knoester ticks all the right boxes to become a very solid Centre-back. He is definitely one for the future.

In curtesy of the platform “transfermarkt”, Mats Knoester  is currently evaluated at 0.6 mil as per on this date 23/12/2019 being when I am writing this analysis. We believe that he will go up to 1.25 million in the next market update.

Very Good Season (all or nearly all the approx. 34 Matches): Value would go up to around 2 mil.

We believe that for the 20/21 season, Mats Knoester , will be moving from Heracles Almelo. We Shall be analysing how and why. Furthermore, who are the potential candidates to acquire this talent called Mats Knoester ?

Our Prediction would be that he shall be having a very good season and he will be playing for AZ Alkmaar next season.

To conclude with, Eredivisie is a talent developing machine and Mats Knoester is one of those talents. You could start a whole never-ending list of what the Eredivisie has produced. Mats Knoester has been producing huge consistent performances for quite some time. No one really expected him to exceed all these expectations.

He has shown that he has got a really mature head at such a young age. Mats ticks all the right boxes of what a defender should be. Knoester is hungry for more, whilst being cautious and very mature. He is a born talented defender.

Having said that, it is true that he is still improving. It is very true that he is getting better by time, as the only thing that Mats needs is experience. He already shows a whole lot of promise, and you could easily see it. We are sure that we will be hearing about Mats Knoester in the future.

When they can’t do it for themselves, it’s the parents’…

5-a-side football comes under the category of Futsal. It is…