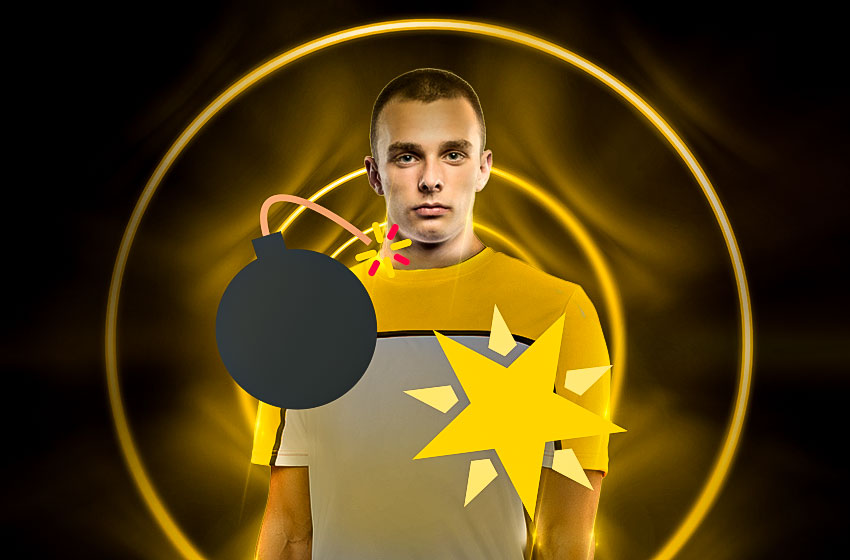 Darko Nejasmic  debuted as a starter with the first team in the cup and became the wonder kid of the first team in late November 2018. With Hajduk in serious difficulty (they had already changed two coaches and won only 3 matches in the first 15). Nejasmic became the pillar of the team, and the team was dependent on him. The Czech man became irremovable since his debut in December. Nejasmic led the Hajduk Split in the remaining 21 matches contributing to the conquest of an unexpected 4th place that will allow the club to participate in the next Europa League.

What is Darko Nejasmics’ style of play

Nejasmic is a real and a very mature prospect, showing all positive traits all defensive midfielders need to have. He is very composed, a good motivator and a very important team player. He led his team to the Europa league with his leadership qualities. Nejasmic is seen to play like Fernandinho and Nemanja Matic. He shows decent strength when attacking, as well as defending; as he is very aware of the surroundings around him. He is more concerned with his team winning than his personal glory.

What are Darko Nejasmics’ strengths?

Nejasmic is good at setting up play, thanks to his vision of play and the quality of passes, very cunning tactically, always managing to find the right position to cover to obstruct the opponent’s game. He’s a skillful and tireless scorer, whilst being very determined in the duels. The team leans on him; he is the player who is present the most.

During the transition phase, he can play both in the short; quickly sorting the ball to the neighboring companions, and in the long run, managing with accuracy to open the game. He can kick from the outside and dribble through the middle when he decides – with precision. Very dangerous in the corner kicks often manages to hit the ball by pointing it to the right direction. He is a young player who seems very mature and experienced. My opinion is that he has the potential to play at the highest levels.

What are Darko Nejasmics’ weaknesses?

It is unfortunate that specialization in players’ respective field of play will not give room for improvement in all players attributes. While some defensive midfielders like Fernandinho and Nemanja Matic are blessed with long shots as an attacking attribute, others like Fabinho and Sergio Bousquet have the ability to control the midfield and distribute key passes to attackers. Nejasmic on the other hand is poor when not with the ball. His composure and vision to get the ball across to strikers is lacking in some areas. Although he is a team player, blessed with a high attacking and defensive work rate, his ability to get to teammates with a cross is not up to par. Nejasmic possesses some vital traits like high work rate and bravery and with time, he can improve on his all-round performance.

Darko Nejasmic has played and started nearly all of the matches for HNK Hajduk Split. He is pumping in performance after performance. A very instrumental player in the midfield. Darko Nejasmic is a pillar within Hajduk. An absolutely essential player which everything orchestrates around him. His movement on and off the ball is absolutely impressive. At just 20-years-of-age he is showing what a talent he really is; showcasing impressive performances one after another. Incredible performances which took him up to the international level with the U21 of Coratia.

Darko Nejasmic has a great platform where he could easily showcase his talent. HNK Hajduk Split choose only the best. They have developed a whole lot of talented players over the years. This further helps to prove, that Darko Nejasmic is within the perfect platform to develop the necessary experience before heading off to the big leagues. He has had an absolutely mega season up until now. Each time he did not play, Hajduk really struggled. Darko Nejasmic does all the ground work, in a very clean fashion. No unnecessary fouls, no unnecessary yellow cards. Very clean and disciplined. Such a joy to see him play.

He has been with HNK Hajduk Split for a lot of years (since 2015). After a season with the youth team he penned a season with the B team of Hajduk at 18 years of age (season 17/18). There he developed a whole lot experience where he played 38 matches in total. That prepared him very well for the season that followed which started a little bit slowly. However, he made his 1st team appearance mid-season, where Hajduk quickly noticed that this kid is special.

Darko Nejasmic came a very long way. Having developed at a very fast rate in comparison to his fellow team mates. This is how he progressed:

He has done all the steps, all that needed to be done. He went through all the ranks with no bypasses. What a beast of a player. We are his fans for sure.

Darko Nejasmic is a very talented player. He plays an essential role within the Hajduk’s first 11. His style of play is very rare, does all the dirty work without actually being dirty. What a joy to see him play. It is true that he needs to refine some rough edges, however, Darko Nejasmic is a very all-round composed player, he definitely breaths a lot of promise. He’s already played around 42 matches for the senior team whilst captaining 2 of them at 20-years-of-age. He is a world-class player in the making for sure.

In curtesy of the platform “transfermarkt”, Darko Nejasmic is currently evaluated at 6 mil as per on this date 14/12/2019 being when I am writing this analysis. We believe that he will go up to 2-2.5 million in the next market update. If by the end of 19/20 season he manages to rack up to 30 appearances (but very importantly – he must rack up the minutes), he would go up to 6 million in value.

Average Season (approx. 7 appearances out of approx. 34): Value would be around 1 mil.

Very Good Season (all or nearly all the approx. 34 Matches): Value would go up to around 6 mil.

We believe that for the 20/21 season, Darko Nejasmic , will be moving from HNK Hajduk Split. We Shall be analysing how and why. Furthermore, who are the potential candidates to acquire this talent called Darko Nejasmic ?

Our Prediction would be that he shall be having a very good season and he will be playing for LOSC Lille next season.

In our eyes, he is an already developed player. Darko Nejasmic is at the right space and at the right platform to shine. This year would be an optimum year for Darko to switch clubs, as he has constantly scaled throughout the years. Darko Nejasmic is a mega player; yes, he needs to improve in certain areas, but he is a jewel. He has all the right traits, knows the game very well. Darko has something different.

Having said that, he has been is pushing match-by-match. Darko’s appearances in both local and national teams are a statement on how good he is actually doing. We are sure that we will hear about the young 20-year-old Darko Nejasmic.