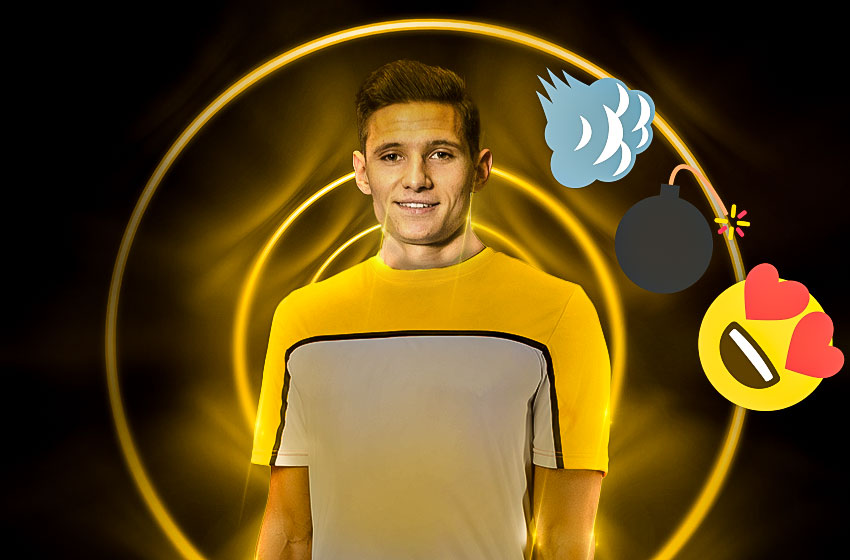 Jagiellonia Bialystok is a very respectable team in the Polish football league. The club was founded by soldiers of the reserve battalion in 1920 at Bialystok. They are not really noticeable when it comes to playing professional football. Not many times have they produced a good number of talented players. Nevertheless, this year is a different one for the team from Bialystok, where they are developing young talents like Patryk Klimala. The prospect from Poland is a young and talented player and he is just 21 years of age.

Klimala made his debut for Jagiellonia in September 25, 2016 and was subbed in against Korona Kielce in the 92nd minute for Przemysław Frankowski. He played two more games against Lech Poznań and Arka Gdynia at the end of the season in both games. Klimala had his first chance in the starting lineup against Piast Gliwice. [3] He played 63 minutes before being replaced by Karol Sanderski, they won 2-1.

Klimala made his Europa League debut against Rio Ave on July 27, 2018, and he was subbed in the 83rd minute under the bed. Altogether, Klimala has made 48 appearances for Jagiellona and in this period he has scored 11 goals for the club as a center forward.

What is Patryk Klimala’s style of play?

Patryk Klimala is one of the strikers who shows some outstanding traits of a center attacker. His style of play can be compared with that of Lewandowski and Eden Dzeko. Coupled with his modern style of play, he creates a massive threat for the opposing defenders. He is a born finisher, due to the fact that he scores most of the chances that he gets. He covers the most distance in his game and influences the game massively. Such a joy to watch the Polish man play at the moment, we would not be surprised if there are greener pastures awaiting him in the nearest future.

What are Patryk Klimala’s strengths?

Patryk Klimala is a threat to all defenders due to his strengths and mentality. He is a pretty tall striker, standing at 183cm, and this makes him very clinical in aerial battles. The ability to dribble past his markers is in his favor, considering how frequently he does that. His work rate is very high as well, as he influences the game mostly leading the attack. In defense, he has the ability to clear off aerial threats from an opposition set piece.

Physically, he is strong. His balance off the ball is one to admire. Coupled with his good positioning and finishing rate, Klimala is one force to be feared by every defender.

What are Patryk Klimala’s weaknesses?

As any attacker, even the best players in the attacking field have very poor defending skills. Having said that, Patryk Klimala falls in this category as well. He lacks some defending attributes like; Man marking, tackling, etc. In attack as well he lacks the ability to influence the game from set pieces. His vision to set up play is not quite up to par.

The most important factor to note from this young prospect is the fact that he possesses most of the abilities of a center attacker. With time, he will improve on the areas where he is lacking. Mentorship and the appropriate teammates will play a great role as well.

Patryk Klimala started as a rotational player in the beginning of the season, however he worked his way up to the starting 11 line-up. At just 21-years-of-age, he is showing to be a pillar of Jagiellonia Bialystok line-up. He has gone from a rotational player the past couple of seasons, to a first team essential.

Jagiellonia Bialystok where never known to produce massive talents, however, we are definitely impressed with Patryk Klimala. They won a couple of cups some 9 years ago which attracted some big polish players to the club. Having said that, they currently sit 9th in the table, thus further shows how impressive Patryk Klimala really is. Scoring 7 and 3 assists in 16 matches at just 21 years of age, whilst being in a club which currently sits 9th in the league; for us, that is utterly impressive. Following his past season struggles, he is definitely shining through, showing how much he has grown.

He is now being called up with the u/21’s national team and scoring 2 in 5 matches.

He has been a rotational player for quite a while in the past couple of years. Having started his stint as a full-back as a Legia Warsaw player, however, that did not really work out; thus, he attracted the eyes of his current team – Jagiellonia Bialystok. They saw that he was a made striker rather than a full-back, where he scored 17 goals in 9 matches with the u/19’s at just 18-years (season 16/17)! Above all, in the same season he made the first of the many, first team appearance.

Furthermore, He was sent out on loan to Wigry Suwalki where he definitely impressed as he scored 13 goals and 2 assists in 27 matches.  Within the past season (18/19), he stapled his name as a rotational striker in the league, whilst starting and impressing all the matches in the polish cup (whilst making it all the way to the final). This season (19/20) is a mega one for him, where he is impressing both as a club level and national level.

In other words, Patryk Klimala, as had an interesting transfer history which shows quite a lot. At just 21-years-of-age, he already switched quite a lot of clubs. He moved from Dzierzoniow U19 to Legia Warsaw U19 when he was just 16/17 years of age. He then moved to Jagiellonia Bialystok U19 after a very short stint with Dzierzoniow U19 in season 15/16. In the season 17/18 he was loaned out to Wigry Suwalki, where he stapled his mark in the polish second division at just 19 years-of-age.

We think that he is definitely on the right track. He is definitely willing to sacrifice and doing all the right moves for his career. He is at the right place to do so; where they are not rushing him, but have been nurturing his talent for quite some years now. We are sure that we are not the ones to judge who he is, as we do not know him personally; however, he definitely shows that he is doing his best, going from club to club and developing each and every season. She shows great promise, we believe that the sky is the limit.

In curtesy of the platform “transfermarkt”, Patryk Klimala  is currently evaluated at 500 thousand as per on this date 11/12/2019 being when we are writing this analysis. We believe that he will go up to 1.25-2 million in the next market update.

Average Season (approx. 10 appearances out of approx. 34): Value would be around 1 mil.

Very Good Season (all or nearly all the approx. 34 Matches): Value would go up to around 2.5 mil.

We believe that for the 20/21 season, Patryk Klimala , will be moving from Jagiellonia Bialystok. We Shall be analysing how and why. Furthermore, who are the potential candidates to acquire this talent called Patryk Klimala ?

Our Prediction would be that he shall be having a very good season and he will be playing for Hallas Verona next season.

In conclusion, we believe that Patryk Klimala  is one to lookout for, a jewel for the future. A really mature head at such a young age; his persistence, determination to improve and sheer talent are a combination that he is one for the future. We will not be hearing his name in the season 20/21, however, in 21/22 he will make his mark. He is definitely one to look out for. Patryk Klimala is one of Poland’s jewels. Remember the name, Patryk Klimala.

The tactical chapters of football are long but extremely interesting. Anything about…